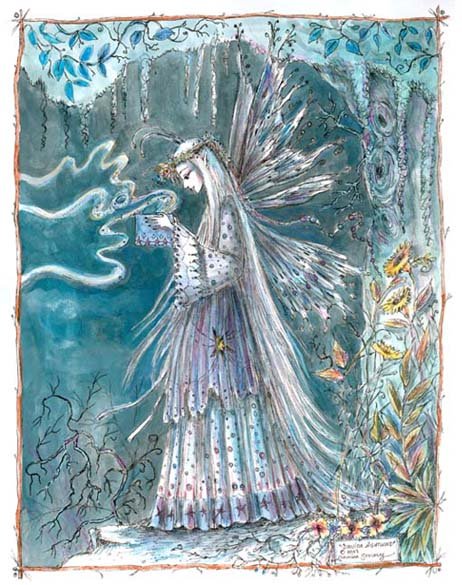 Emma wakes up. She remembers nothing of what he dreamed, but what happened before sleep. The silver web reflects flashes inside the room and the young woman go out to look. The car is gone. The little spider has done her job perfectly. Emma prepares a light suitcase, has a good breakfast, today, yes, the trip requires it, call a taxi, prefer not to drive, and replace the daughter of Anka in her peculiar crystal box, because the young woman understands that the company is very helpful of the magic spider. Closed door, trip on the way. The taxi leaves Emma at the station. She only has to wait 23 minutes to get on her train. Chooses window. Save her light suitcase and sits down to continue reading the book that entertains her and relaxes her mind. The passing of the trees, while looking through the windows of the railway machine, Emma remembers the words of Aldrar, that of…

“Some people travel a lot and some people do a little, but everything consists of that, in go from one place to another. Life is based on a constant movement.”

The train has reached where Emma has to go. The young girl keeps the book, grabs her light suitcase and go down to the platform. A sign confirms that it is in the Carmarthen Station. The bus driver, waiting at the stop near the station, warns that in 5 minutes it will start up. Emma pays her ticket and gets on the new transport that will take her to her hometown, the town of Llansteffan. The cabin red telephone is the signal that has already arrived. The bus stops at High Street and the young woman goes down. Almost nothing has changed. Emma feels as if she has not never gone, as if time did not exist in this area of ​​the planet, as if the clock that marks the seconds, minutes, hours… Would have stopped as soon as you got off the bus. The young girl begins to walk on the path of the church, a narrow path that drive to the private pass of Higgings-Doyle Castle. Grandpa Mathias Doyle, he was a man who managed to amass a great fortune in the middle of the last century. With his wife died shortly after birth Alice, for a terrible and unknown illness, Sir Doyle, worried about the future of his daughter, decided to leave him “Llansteffan Castle”, among other personal assets, as an inheritance, it was the favorite place to which they were summering him and his little Alice. Known the news of such acquisition, and after many administrative processes, both the young Doyle, which would soon become the lady of Arthur Higgings, like this one, decided to rebuild the Castle, keeping the parts original and without modifying too much the architecture of said early building s.XII. Some inhabitants of the area opposed the remodeling project of what they considered almost theirs, but after several years, the Higgings-Doyle marriage convinced to the opponents, building a wonderful mansion that was open to public at certain times of the year, such as when Emma was traveling abroad with her parents. Yes, Emma Higgings Doyle realized her dream of exploring new lands, reaching even such inhospitable places as Mount Sanqingshan, in China, where the granite columns resist the passage of time, as if they were stalagmites that rise from the earthly soil; He was able to observe the waterfall of fire in the Park Yosemite, in California and commonly known as Horsetail, or visit the Valley of the Luna in Brazil, a really fascinating place, inside a forest, with formations rock formations formed by quartz and other crystals.

For Emma’s parents, as well as grandpa Mathias, traveling the planet it was like feeding not only the Soul but also the Mind. But they were not going to places common, no. They sought natural wealth, the wealth of Mother Earth. Is by
that, when Sir Doyle saw how much it benefited his little Alice, orphan of mother, the visits to Llansteffan, decided to get the Castle as a way of bequeathing something beautiful, natural, forged by man, stylized by time and valued by the be human to his only daughter. All inheritance is the result of our work, not only at the material but also spiritual, […]

The walls, like the floor, are also different from the rest of the Castle and are full of letters and numbers, as well as symbols. There is a detail that gets Emma’s attention. There is a calculated distance in the walls, determined by the relief drawing of the shape of a tree and next to the a different animal is seen The animals are: a fox, a rabbit (this detail makes Emma smile, because she remembers Mister White, which seems to be more related with the young woman of what she believed), a couple of stoats…

-Here you are! -The girl says loudly.

Those cunning and fast animals that helped her escape from the House of Witch, the first one Emma met, the fox that accompanied Xendria and the famous White Rabbit, all of them appear in the engravings of Isuur. By continuing with the
seen in the peculiar walls, Emma discovers more animals but when she goes to look at them more in detail, they disappear, as if they did not want to be seen. A noise, nothing unknown to the girl, it hears. Tic, tac, tic, tac, tic, tac…

Comes from a pocket side of the white dress of fine silk.

-It can not be, -says the young Higgings to herself, amazed at what she has just done discover.

It’s the same clock that Aldrar showed Emma, the silver watch that belonged to his grandfather. The young woman looks at him and while she does so, she feels the presence of her, of Aldrar.

But there is no answer.

-I know you’re here, I know because I feel you, I can even smell you…

One of the cloth canvases moves. Is it because of the strong wind that enters through a of the small windows that has been opened alone? It seems that since Emma arrived, the windows of the renovated Llansteffan Castle can open themselves… The young woman hesitates if she must take with her the watch that belonged to the woman who accompanied her so much childhood or on the contrary should leave it in Isuur. And suddenly, the arm as well as the
hand holding the metal object, receive a kind of relaxing feeling, and the clock it sounds again: Tic, tac, tic, tac…